A Short Summary of the 2018 Cruise to Maine By Eric B. Forsyth.

After a busy summer of maintenance, we left Weeks Yard on September 5th, beside myself, Jeremy was to crew for the whole cruise and Stephen for the first half.   We had a light wind outside the Inlet which wafted us as far as Shinnecock, then we powered to Block Island. A northeast wind prevented a sail directly to Buzzards Bay and instead we tied up at Newport for the night, it was expensive ($6.50/ft).  The same wind again kept us out of Buzzards the next day and we sailed to Cuttyhunk, my first visit there in many years, it was relatively inexpensive. The next day we powered up Buzzards in a light northeast wind and anchored at Megansett Bay to await a favorable current in the Cape Cod Canal.  We anchored at Provincetown just before midnight and in the morning moved to a slip so that we could more conveniently enjoy the pleasures of the town. It is a colorful place which we all liked, especially the used book store. Apart from a light wind at the start we encountered windless conditions with fog and drizzle at times in the Gulf of Maine.  It took about 31 hours from Provincetown to make it to Bar Harbor, Maine, altogether a tedious drag from Long Island. But it was an interesting experience for Jeremy and Stephen; their longest off-shore passage.

We picked up a mooring and blew up the inflatable.   Naturally the old Tohatsu outboard wouldn’t start and seemed to be frozen tight.   After a telephone discussion with a local expert I decided it could not be repaired in a reasonable time frame.   For the next hundred miles or so we planned to gunkhole along the picturesque Maine bays; Penobscot, Muscongus and Casco, a functioning outboard was essential.  I was able to buy a new engine the same day. Our first stop, for lunch on the 14th, was Harbor Island, an uninhabited State Park.   Picking up a mooring, Fiona managed to wrap the rode around the prop, but it came free with a little forward and reverse juggling.   The crew explored the trails on the island and then we moved a few miles to Stonington for the night. On raising the anchor in the morning, the electric windlass began to make strange noises and ultimately died.  The next day I had planned to visit Butter Island, but it was too foggy to see much, and we made it to Castine by depending on the chart plotter and radar. The town has in interesting history as British, French and American soldiers occupied it in the 18th and 19th centuries.  The next stop was Belfast, one of my favorite Maine harbors.   The Dock Master, Kathy, whom I have known for many years, had read my book and asked for two more copies.   In the evening we went to see a movie; ‘Crazy, Rich Asians’. In most towns I always tried to sample the New England Clam Chowder, this year they were of poorer quality than average, usually lacking many clams.   Belfast, unfortunately, was no exception. It was only a few hours down the coast to Rockland, where Stephen planned to disembark and make his way home via bus and plane. We arrived in time for him to thoroughly explore the famous Farnsworth Art Museum, with its fabulous collection of paintings by the Wyeth family.   After Stephen was safely on his way via Concord Bus Line, Jeremy and I took an Uber to the Owl’s Head Transportation Museum.

The next crew, Scott, arrived later, on the same bus line.   The next day we pulled the windlass to pieces, Scott has 20 years engineering experience in the US Navy.  A key in the motor shaft had mysteriously come adrift, we reassembled the unit and it gave good service for the rest of the cruise, but it will have to be looked at again when we get home.  In calm weather with intermittent fog we chugged down to Port Clyde and picked up a mooring, we had left Penobscot Bay. The snack bar at the Port Clyde Grocery Store provided an excellent chowder.   The next day we left after lunch for Monhegan Island , it lies 10 miles off the coast. I pulled a stunt I have played before; by arriving after 4 pm we were able to use a charter boat mooring as they wouldn’t be back until after 10 am the next day.  Monhegan harbor has been used for centuries and the bottom is notoriously foul, anchoring is not recommended. We landed the dinghy on the beach and walked to the lighthouse and then through the woods to the spectacular cliffs on the east side of the island.   The next day our first stop was Damariscove Island. On the way we tried unsuccessfully to correct the auto pilot for magnetic deviation and variation. It didn’t really matter; the autopilot was doing a good job of holding a course and we could check the actual course independently using GPS.  Our guide book described the early colonial history of Damariscove; it was occupied before the Mayflower landed on Cape Cod. After lunch we powered over a calm sea to Boothbay. We had dinner with an old friend who lives there and later enjoyed the company of an elderly couple over happy hour in the cockpit who had been cruising Maine for years.  They gave me a book about growing up in a lighthouse, the man’s grandfather had served as a keeper for decades. They were one of the few cruising boats we encountered on this cruise; I don’t know why the number of cruisers seems to have declined over the years. The next day we traversed Townsend Gut and spent the night moored at Five Islands on the Sheepscot River.  The next day we arose early and headed for a rounding of Cape Small; we were about to enter Casco bay. The fog got thicker as we entered more open water and although we were tracking our position on the chart plotter the breakers on Fullers Rock seemed disconcertingly close as we rounded the Cape. The fog persisted as we picked up a mooring at Sebasco Harbor Resort but fortunately it had evaporated in the morning and I was able to show the crew one of my favorite remote anchorages, The Basin, lying a few miles north of Sebasco.   The entrance is tricky and is still guarded by a bald eagle, but the remoteness of the place has been spoilt by the appearance of about a dozen boats on permanent moorings. After a look around, we headed for a night on the anchor at Jewell Island. Ashore, a walk through the thick woods, lie the old WWII observation towers. From there we headed for a couple nights in Portland and the trip back to Long Island, under power all the way. Leaving Block Island, we encountered the most impressive lightning display I have seen in many years; sheet lightning illuminated the whole seascape for seconds at a time.  We arrived back at Weeks a month after we left, a shade under 900 miles logged. 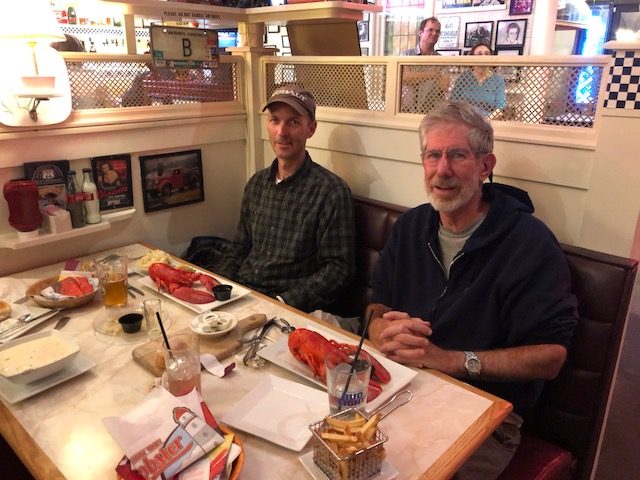 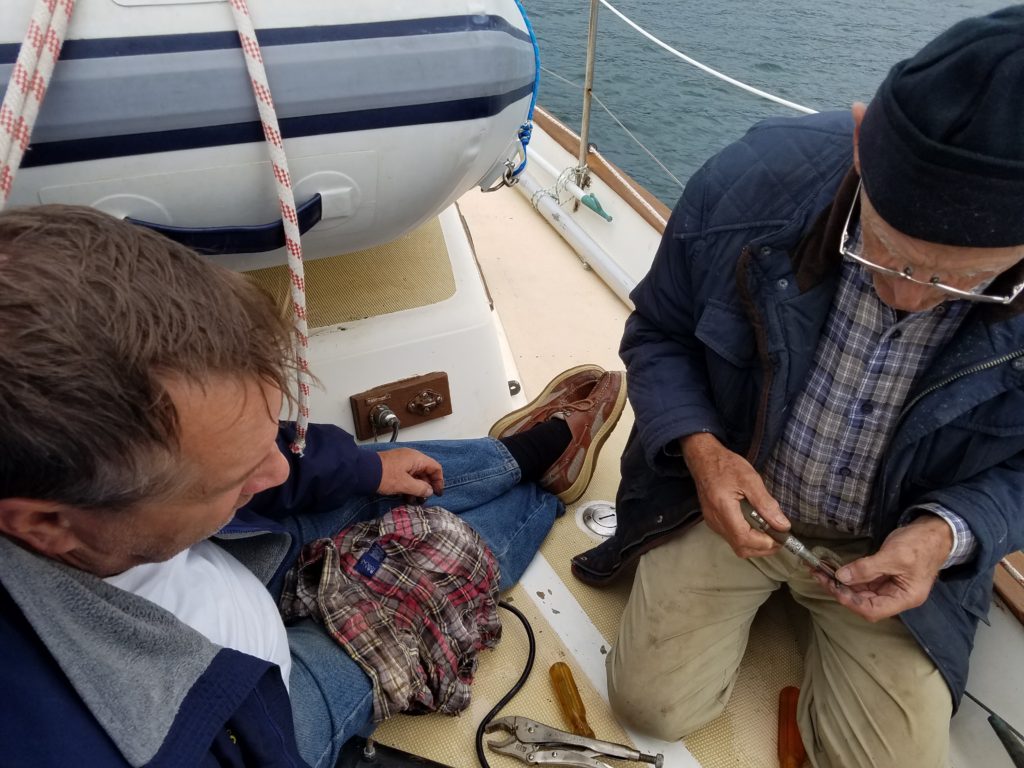 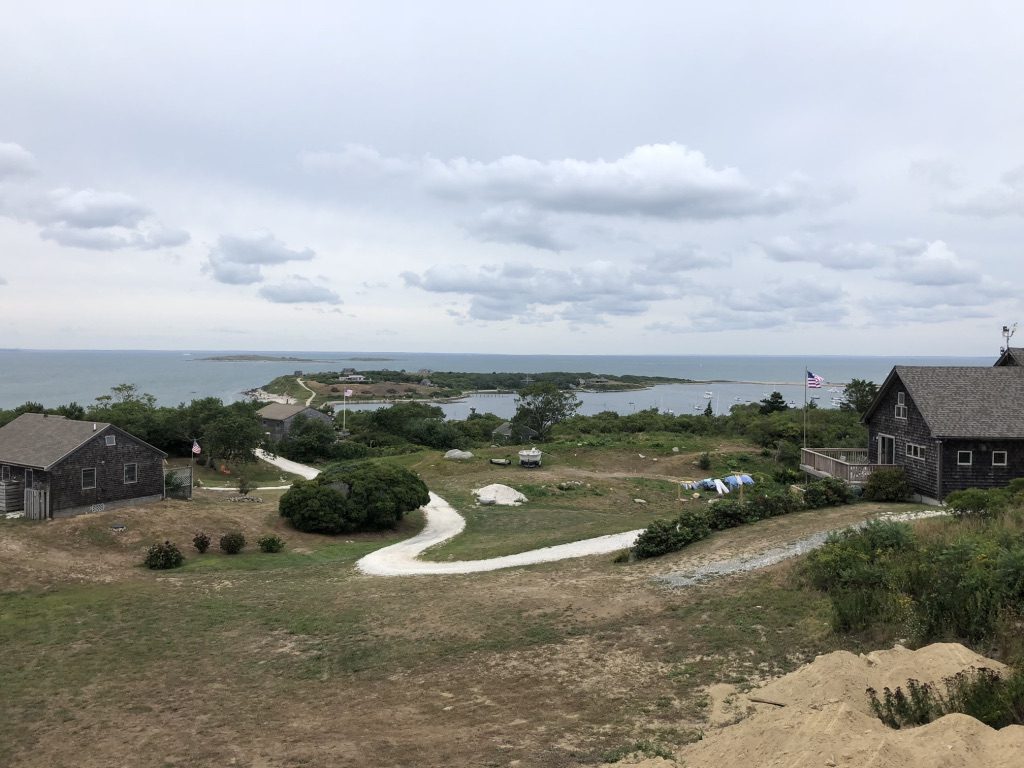 Sign at the ruins of the old fort, Castine (photo credit S. Alexander) 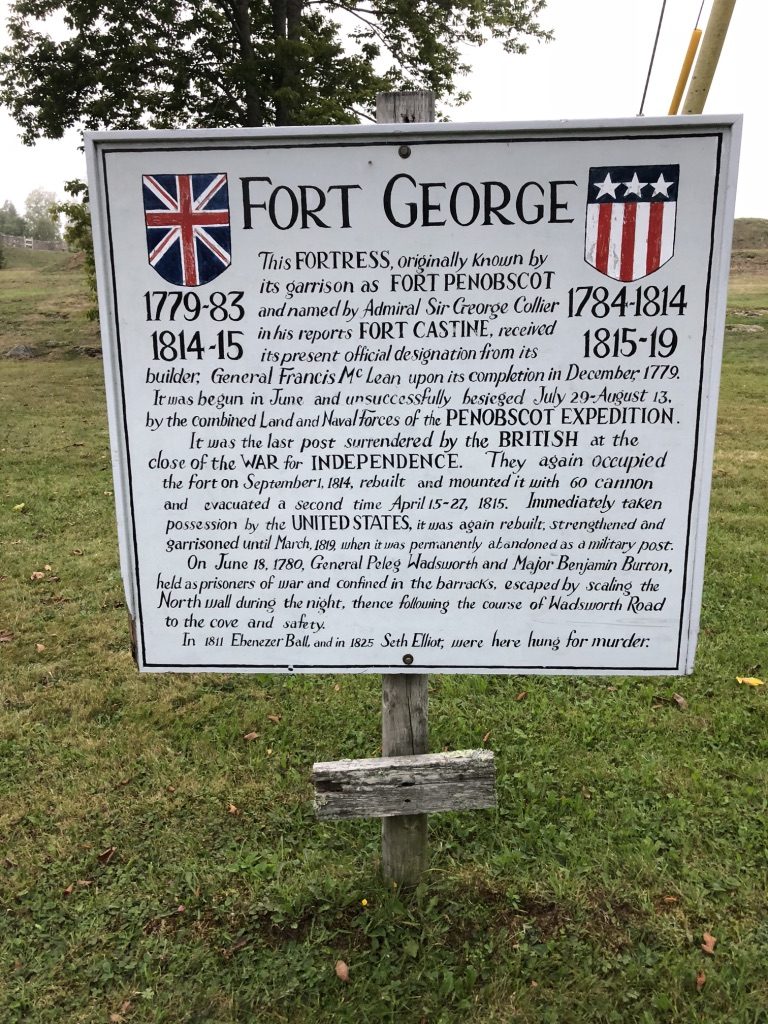 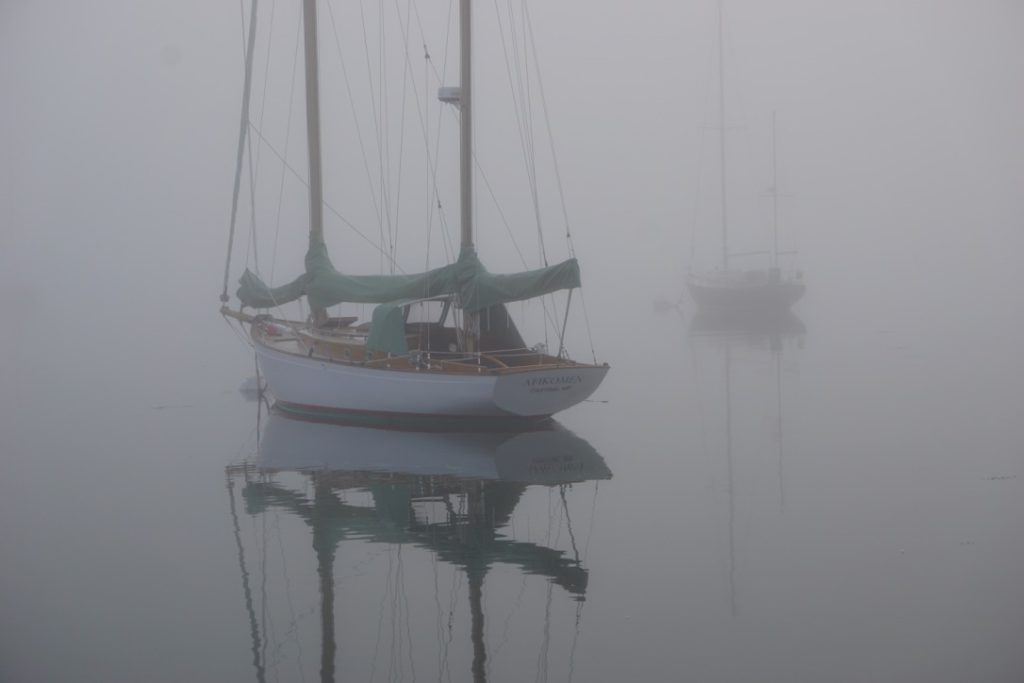 Lighthouse on the jetty at Rockland (photo credit S. Alexander) 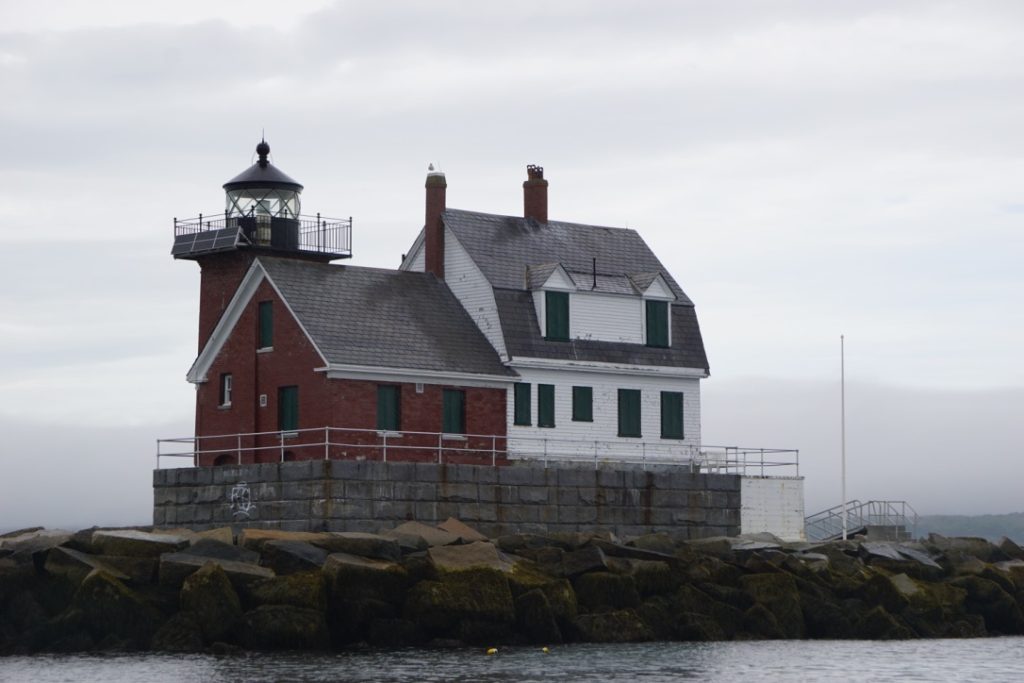 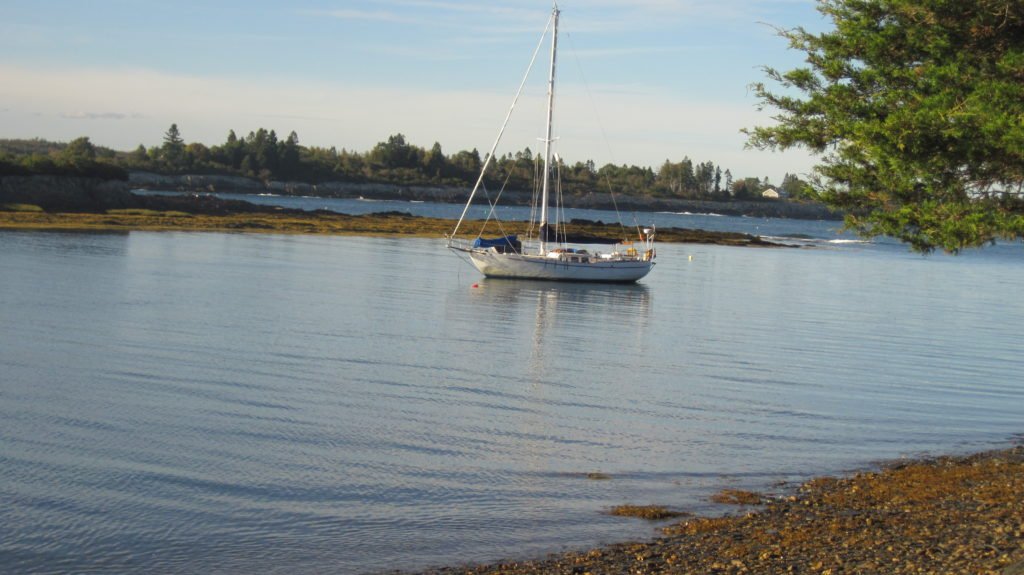 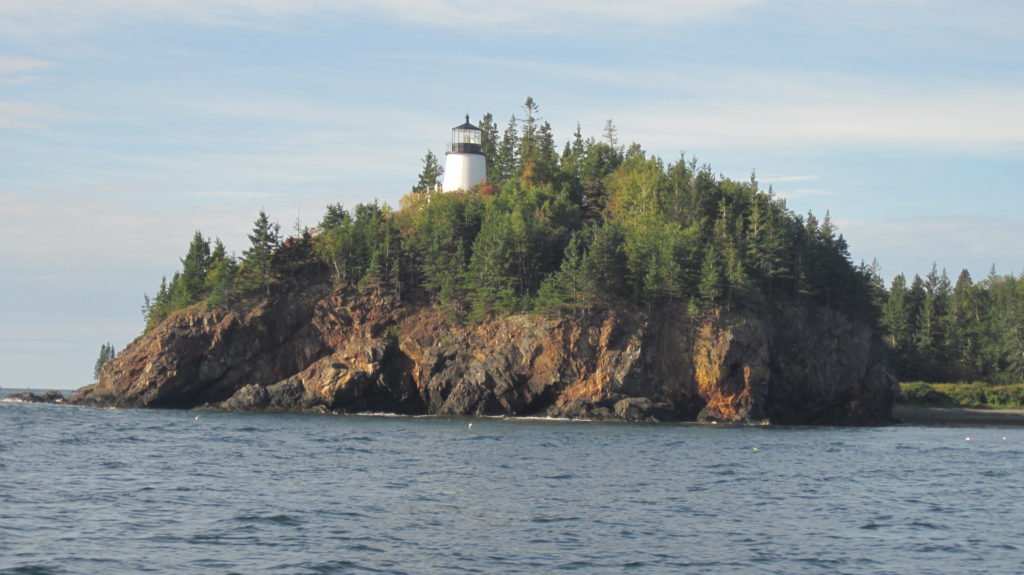