About Eric and Edith Forsyth 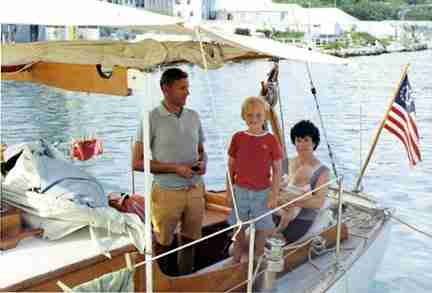 Eric and Edith Forsyth were both recruited by Brookhaven National Laboratory on Long Island, New York in 1960. Eric was completing graduate studies at the University of Toronto, prior to that he had served as a fighter pilot in the RAF.

Edith qualified as a physician at Manchester University (UK) in 1956 when she was 23 and married Eric in 1958 in Canada. They learned to sail on Bellport Bay and made their first transatlantic crossing as crew in 1964. In 1965 they purchased the Dutch-built KOK 35 sloop they named IONA. Their son Colin was born the same year.

In 1968 they sold their house in Brookhaven and Eric sailed IONA to the Caribbean. Edith joined him with Colin and their 8-year-old cat. By late 1969 they were broke and Eric reluctantly returned to work at Brookhaven National Laboratory. Their daughter Brenda was born in 1971 and Edith then started a private practice. FIONA was delivered as a bare hull in 1975 and completed in 1983.

During that period they chartered in the Caribbean and sailed with friends. Eric participated as navigator in 6 Newport to Bermuda Races between 1972 and 1982. From 1984 to 1989 FIONA made long summer cruises, Edith joined the boat at the destination by air as her medical practice was very busy by then.

In 1990, shortly after returning from a sojourn aboard FIONA in French Polynesia Edith was stricken by ovarian cancer and died in September, 1991. Eric returned to FIONA a month later with two young men and they quickly repaired the ravages of the year left unattended in the tropics and the visitation of thieves. They sailed from Tahiti in late November, 1991 and rounded Cape Horn in January 1992. The 16,000 nm trip to Bermuda took five months with stops at only six ports.

Eric made two long summer cruises in 1993 and 1994 to Newfoundland and Labrador. He retired in 1995 and sailed around the world. FIONA was damaged by heavy weather off the N. Brazilian Coast in late 1995 and after repairs in the Caribbean left via the Panama Canal for the circumnavigation in January 1996, returning to Long Island in September 1997. In July 1998 he sailed to Easter Island and the Chilean Canals, revisited Pt. Williams and crossed the Drake Passage to the Antarctic Peninsula. On the way home he sailed to South Georgia, Tristan da Cunha, Cape Town, St Helena, Brazil, Barbados, St Martin and Bermuda. A six-week fall sail to Maine rounded out 1999.

In the 2000/2001 cruise Eric sailed to the High Arctic, Spitzbergen, Norway, Scotland, Ireland, Portugal and the Caribbean. Another cruise to Maine in August and September completed 2001. Eric was awarded the Blue Water Medal of the Cruising Club of America in January, 2001. The citation reads:

“The Blue Water Medal for 2000 is awarded to Eric B. Forsyth for a remarkable voyage in his 42 ft sloop to Antarctica from his home port at Patchogue, Long Island via the Panama Canal; Galapagos; Easter Island, Puerto Montt, Chile, and after Port Lockroy on the Antarctic Peninsular to South Georgia Island; Tristan da Cunha; South Africa, and returning home by way of St. Helena, Barbados, St. Martin and Bermuda.

This was a 21,784 mile voyage, completed in ten months with a crew that varied between one and two young men. Furthermore, Forsyth wrote copious descriptions of his entire cruise including a special guide to the Patagonian passages, including mileage of each segment, fuel consumption, and all the features of the land and nature encountered.”

Eric completed another circumnavigation in 2002/2003. The cruise followed the track of the old clipper ships around the Cape of Good Hope, Cape Leeuwin and Cape Horn. Fiona suffered a fair amount of wear and tear on the trip, necessitating a big refit in the winter of 2003/2004. Eric sailed to Canada, Europe, South America and the Falkland Islands in 2004/5. The long cruise in 2006/7 took Eric to the Antarctic Circle. Capt Forsyth was honored in November, 2007, at the annual convention of the Seven Seas Cruising Association with the presentation of the Seven Seas Award.