Just Why Was Darwin there?

“I discovered the basic facts in the article when I was reading up on Patagonia, the Chilean Canals and the Beagle Channel in preparation for the cruise there in 1998-1999. I frequently told the story to friends who were usually amused. So I decided to write it down and I submitted it to Ocean Navigator. They rejected it; too sexy I guess. In that case, I thought, it’s just the thing forLatitudes and Attitudes. They rejected it too, not sexy enough, I suppose. So rather than waste any more stamps I am going to post it on the FIONA web site.”

Anyone who navigates in the wild channels on the southwest coast of Chile or ventures near the bleak rockbound shores south of Tierra Del Fuego into the Beagle Channel must be struck by the profusion of British names given to hundreds of bays, promontories and distinctive features. For example, entering the Canal Cockburn near 55º S (the pilot warns to do so only in daylight in clear weather) you will find Cabo Gloucester, Bahia Euston, Bahia Laura and Bahia Otway. These names were given during surveys by the Royal Navy, which explored and charted the forbidding wastes starting about 1826. Ever suspicious of the French after the end of the Napoleonic wars in 1815, the Admiralty kept a large body of trained seamen on the books by engaging in a vast program of exploration of the world’s more remote places. One of the ships dispatched literally to the end of the earth to chart the desolate and wind-swept coast north of Cape Horn was the Beagle, destined, of course, to achieve lasting fame when its famous supernumerary, Charles Darwin, postulated the Theory of Evolution many years later. Incidentally, he also gave rise to Darwin Cordillera, Isla, Monte, Narrows and Paso on the charts. The seeds of the theory were first sown in Darwin’s mind by observations he made during his five-year cruise aboard the Beagle. But how Darwin came to be on the Beagle in the first place is a tantalizing mystery, and at least one explanation implies the world of science owes Darwin’s Theory to a rather unpleasant member of the local Yaghan Indian tribe nicknamed York Minster.

Four Indians wound up aboard the Beagle during its first cruise, 1826 to 1830. The skipper, Captain Stokes, had committed suicide and Captain Fitzroy was appointed in his place to complete the tour. Stokes is remembered by two Bahias, two Cabos, Monte, Ensenada, Punta and Surgidero (anchorage). Towards the end of the cruise Yaghan Indians stole the whaleboat which was vital for surveying the smaller bays and creeks inaccessible to the Beagle. Fitzroy made furious attempts to get it back, finally kidnapping the four Indians as bargaining chips. Unfortunately for Fitzroy, the Yaghans were a very primitive society with no chiefs and no concept of property. So there was really no one to bargain with and he never got the whaleboat back. At this stage he decided to take the natives back to England, his justification being that they could return in a few years speaking English, and trained in rudimentary agriculture so that the tribe could begin to lead a better life. Most important of all, for Fitzroy was deeply religious, they could become Christians. He argued the action could also help any sailors who might be shipwrecked on the coast in future years. The admiral commanding the South American station gave Fitzroy permission to transport them on a navy ship to England, all subsequent expenses to be borne by Fitzroy himself. It should be mentioned that Fitzroy was independently wealthy and came from a politically well connected family which traced its descent from an illegitimate child of Barbara Villiers, the powerful mistress of King Charles II.

On arrival in England in late 1830 one of the Indians contracted smallpox and died. The remaining three were packed off to a quiet village to receive an education in English and Christian values from two Church of England clergymen. Also keeping an eye on them was the coxswain of the Beagle, James Bennett, who doubtless kept Fitzroy briefed. News of the strange denizens of an unimaginably remote part of the world titillated London society and ultimately, in 1831, Fitzroy was commanded to bring them to an audience with King William and Queen Adelaide. The youngest of the Indians was a girl the sailors called Fuegia Basket, because she had originally been hauled up the side of the ship in a wicker basket. At that time she was about ten years old. Next to her in age was a young boy called Jemmy Button, so called because Fitzroy gave his father a mother-of -pearl button for him. Both Fuegia Basket and Jemmy were bright children who rapidly picked up a smattering of English and adapted quickly to the life into which they had been thrust. York Minster, by contrast, was probably in his twenties and was slow to learn, truculent and generally unhappy. Queen Adelaide was very taken by Fuegia Basket, she gave her a bonnet, a ring and some money. All the officers that were even remotely connected with the Beagle’s voyage were suitably honored by the royal attention.

After the audience things went downhill and the mystery begins: in the summer of 1831, less than a year after the Beagle‘s arrival, Fitzroy suddenly decided to take the Indians back to Patagonia, but why so quickly? As the Admiralty was not planning to send the Beagle back to South America for at least two years Fitzroy applied for a year’s leave of absence and hired a privately owned schooner to take the party back. This set him back about a thousand pounds, a substantial sum in those days. Riesenberg in his history of Cape Horn suggests that James Bennett caught Fuegia Basket and York Minster in flagrante delicto and communicated this Captain Firzroy. Just the news that the hulking York Minster was enjoying the favors of an underage girl would have been disastrous for Fitzroy’s career considering the royal interest. Worse, suppose she became pregnant? No wonder Fitzroy put together an expedition at lightning speed. This reason for Fitzroy’s haste is not supported by other historians, although it is extremely unlikely that anything was written about the matter and the speed with which Fitzroy moved is circumstantial supporting evidence. At this stage perhaps the reason for Fitzroy’s trip was whispered in the highest echelons of the government. A well-placed relative, Lord Londonderry, leaned on the Admiralty and suddenly the Beagle was ordered back to South America. In fact, Fitzroy forfeited the money he had already paid for the schooner charter. Of course, some kind of cover story was needed for this change of heart – enter Darwin. He would be charged to study the strange flora and fauna in remote Patagonia and points west. Ironically, both Fitzroy and Darwin believed the studies would confirm the story of creation told in Genesis. Fitzroy moved the Indians to Plymouth on October, 1831, where they were directly under his eye and out of the London spotlight. Repairs and modifications to the Beagle were rapidly completed and after a couple of false starts caused by bad weather the expedition left England just after Christmas, 1831. Besides Darwin there was a missionary who planned to disembark with the Indians when they got back to the Beagle channel. What happened to Darwin is history. What happened to the Indians, the missionary, and the subsequent attempts to civilize the region is also a fascinating history, but that is another story.

(Above) The author poses in front of native photographs, Museum of the Yaghan Indians, Port Williams, Chile. By the early 20th century the tribe was extinct. 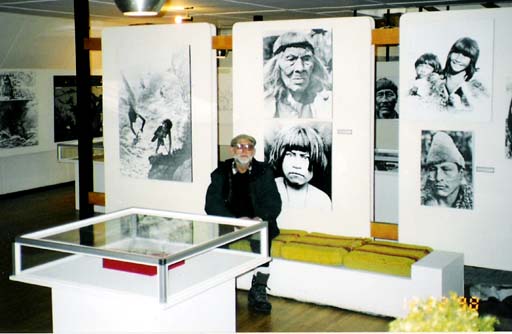