“ I have read many books about sailing, from books like Commander Ellsberg, O’Brien, Tristan Jones, Joshua Slocum, Moitessier, Albi, Rousmaniere, and Pardy, …, this book by Eric Forsyth was one of the best .”

“(He)..made it to all the ports of call, from the idyllic to the most challenging — the Northwest passage over the top of Canada, the ports in the Antarctic, Cape Town and all of the great southern capes, Pitcairn Island, Tahiti the Caribbean islands.”

“It will be a joy for anyone familiar with deep-water sailing and an inspiration for those eager to try it. An intrepid, educational, and thoroughly enjoyable voyage.” ….Kirkus Best Indie Memoirs of 2018

“This book is a compendium of information for sailors who wish to follow Forsyth’s voyages, as well as a fascinating read for armchair travelers”…Long Island Advance

“(He has)…circumnavigated the globe twice, sailed around North America via the Northwest Passage and the Panama Canal, and completed voyages to the Baltic, the Artic and Antarctic and many other places. An Inexplicable Attraction is a very entertaining compilation of these adventures.”…Windcheck

“ (He)…does a wonderful job of taking you along on the boat with him and his crew… and having the high and low points of each passage…presented in Mr. Forsyth’s matter of fact, often tongue-in-cheek, style  that underscores the humor and patience one needs when  voyaging”… Ocean Navigator

“269,161! That’s how many nautical miles Captain Eric B. Forsyth has sailed over the Earth’s oceans, 247,362 of which were aboard his custom-finished Westsail 42, Fiona. Astonishingly, most of these miles were accumulated after his retirement from the Brookhaven National Laboratory. Imagine, two circumnavigations, including one eastabout loop following the old clipper route around the southern capes; two successful trips to Antarctica (four attempts were made); two trips through the Arctic Circle, including a circumnavigation of North America via the Northwest Passage; a spin around the North Atlantic as far south as Fernando de Noronha off the coast of Brazil; and numerous cruises to and along the coasts of Maine, Greenland, Iceland, the Azores, Falkland Islands, Shetland Islands, Caribbean Islands, and the Baltic Sea. For this sailing background, Captain Forsyth is a recipient of the distinguished Cruising Club of America’s Blue Water Medal. This book is a narration of his voyages to remote regions and foreign lands aboard Fiona. Pictures of his exploits are sprinkled throughout to carry the reader along.

Forsyth begins with a description of his early days sailing with his wife Edith (to whom he dedicates this volume) aboard one of their early boats, a 35-foot steel sloop named Iona. He and Edith made numerous cruises along the New England coastline, eventually sailing Iona to Bermuda and back. But it was aboard their next boat that Captain Forsyth would sail the world over, favoring the high latitudes. Edith came up with the name Fiona when first she laid eyes on the hull and remarked, “My God, it’s another  Iona!” And such is the wit and humor laced throughout this amazing tale of time spent blowing across oceans. Sadly, Edith would not sail with her husband for many more sea miles, as she succumbed to ovarian cancer in 1991, as Forsyth explains in the opening sections.

What follows is a genuinely amazing tale, as Captain Forsyth sails Fiona through some of the most remote regions of the globe with that come and go like the wind. By chapters, he recalls ten different long-distance cruises and his experiences with crew members, cultures, bureaucracies, geographies, wildlife, and weather encountered along the way. What’s more, he re-tells his adventures in a straight-forward and witty style, as if he were sitting next to his reader at the club bar with only the occasional glance at Fiona’s logbook for reference. His book is an accurate depiction of life aboard a small sailing vessel, offering glimpses of far-away lands and cultures witnessed by an extraordinary sailor.

Ride along, this book allows the reader to feel as though they’re a part of Forsyth’s crew. And what a journey it is!”

“It is a full and fascinating book, and I encourage you to seek out a copy”Cruising Club of America ‘Voyages’

Eric’s book, An Inexplicable Attraction: My Fifty Years of Ocean Sailing, is available in print (full color and B&W editions) and e-book format through the following retailers: 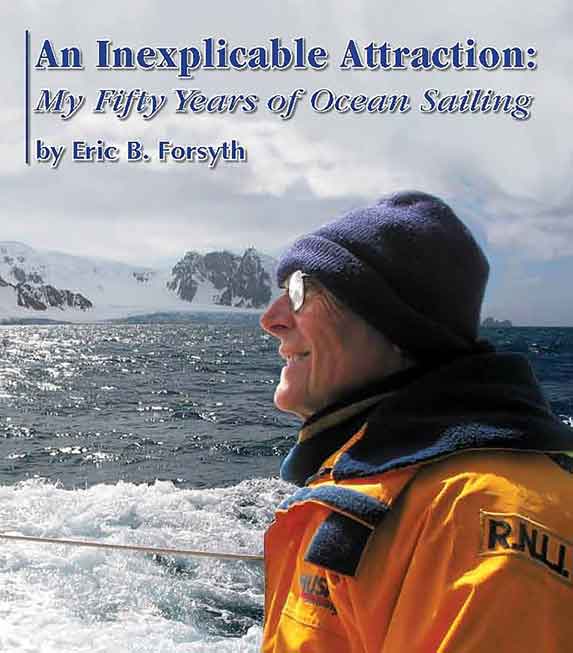 Get the print or e-book format